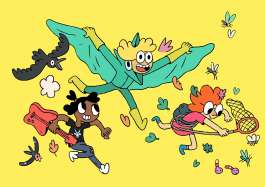 We are working on an adaption of the wonderful comic book series "Nika, Lotte, Mangold!" in cooperation with the author Thomas Wellmann for wich we received funding from Film- und Medienstiftung NRW

Nika is into music, video games and action. Lotte is super clever, super accurate and super smart. Mangold likes to move stuff around, has the best taste in clothes and makes the best cannonballs

There's always something going on, and when there isn't, the three of them think of something. Just standing still makes no sense, except when dreaming.

Sometimes silly, sometimes thoughtful and always with a lot of humor, all kinds of ideas and a zest for action, Nika, Lotte, Mangold and a bunch of other friends face the big and small adventures in in their lives, such as a runaway otter, cannonballs, a garbage fight, creepy ghosts, a river expedition or a robot course.